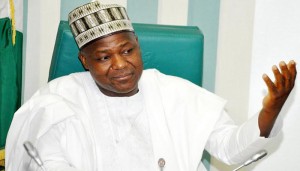 The backlash was sharp and heavy. Many who spoke against the suggestion by some Senators for presiding officers of the National Assembly to be placed under immunity in the constitution and on pension, out rightly described the move as selfish and anti-people. They would have thought the House of Representatives will simply take note of the condemnations coming from different angles and back out from these two unpopular plans. But surprisingly on Tuesday, July 12, the House passed for second reading, the bill, sponsored by House Minority Leader, Leo Ogor ( PDP, Delta ) seeking to alter Section 308 (3) of the Principal Act of the constitution to add Senate President, Speaker, Deputy Senate President, Deputy Speaker, immediately after the word ‘Vice President ‘ and also to include Speaker of a State House of Assembly, Deputy Speaker of a State House of Assembly immediately after the word ‘Deputy Governor’.
In a replay to what happened at a-two day retreat on Constitution Review organised by the Senate Ad Hoc Committee on Constitution Review in Lagos, which had senators sharply divided on both proposals, members of the House took opposing positions on the matter. Leading the debate on the bill,  Ogor who is certainly not new to parliamentary battles argued that the proposed immunity for National Assembly principal officers was to protect the legislative arm and to ensure that the leadership of the National Assembly fully concentrates on its duties. “The amendment is straight forward but it needs some clear explanation. The amendment seeks to strengthen the National Assembly; they (leadership) should be protected in the period they are in office”, he said. He had support, as speaking in favour of the other ranking member, Ossai Nicholas Ossai ( PDP-Delta ) said the alteration was targeted at protecting the independence of the legislature. He further posited that primary duty of legislators is to make laws for good governance and they needed to be protected.
But rising in total rejection of the proposed amendment, Majority Leader, Femi Gbajabiamila (APC-Lagos) stated his opposition to the bill, saying that there was not a single democratic country where heads of the legislature enjoy immunity. Gbajabiamila insisted that the timing of the bill was wrong especially now that the Senate President Bukola Saraki was facing trial at the Code of Conduct Tribunal and the FCT High Court.  He said:  “I oppose the bill because we are here to legislate and on behalf of our constituents but the question is what are we here for? Timing is very important here and we don’t want to send the wrong signal, because of what is going on in the Senate, it will be misinterpreted. I’m not aware of any country where such applies. Let us do what will endure. In most countries, only the President and the  Vice- President enjoy it”.
In his intervention, Speaker, Yakubu Dogara stated that being a constitutional matter, the bill would be referred to the Adhoc Committee on Constitution Review. But lawmakers voiced opposition to the bill, with shouts of ‘no immunity’ from different sections of the green chamber. The shouting between lawmakers in support and against the bill lasted for over 20 minutes. While some converged around the Speaker to find a middle ground,  other lawmakers broke into  groups with many making efforts to justify their positions. Deputy Whip, Pally Iriase was largely ignored by lawmakers as he tried in vain to restore decorum to the House.  Ali Madaki ( APC- Kano ), who insisted that his point of order be taken could hardly be heard, but he stressed that the integrity of the House should be protected by jettisoning the bill.  At a point, the Speaker had to invite the Chairman, House Committee on Appropriation, Jibrin Abdulmumim ( APC-Kano) to speak to him privately, but the lawmaker who is a known ally of Dogara held a piece of paper  with ‘no immunity’ written on it. When the Speaker eventually sought the intervention of Deputy Chairman, Committee on Rules and Business, Olabode Ayorinde (APC -Ondo) on the position of the House Rules on such matters, the lawmakers cited Order 8 rule 98 (3) that upon second reading, the bill shall be consigned to special committee on constitution, but his clarification didn’t go down well with lawmakers who insisted that the order was specific on the bill being transmitted to the committee ‘after debate’. And Despite the loudly voiced complaints by his colleagues, the Speaker stated that his decision to commit the bill to the constitution review committee was in order as the experts in the committee would scrutinise it with professionalism. “If we throw the bill out, we will never see it again,” he said, as he put the question, to have it referred to the ad hoc Committee, banging the gavel to signal an end to the heated debate. The atmosphere in the green chambers was so heated that many didn’t realise that the Clerk of the House didn’t read the full title of the bill.
The clash of positions was largely unpredicted even if it’s happening at all was quite predictable. Right from when senators stirred the hornet’s nest by raising the issue of immunity for presiding officers and pension for this select group, Ogor who spoke to Daily Sun and a few other lawmakers stated their positions on the matter, each sounding uncompromising on both issues. In a phone interview with Daily Sun, the Minority Leader expressed support for the senators.