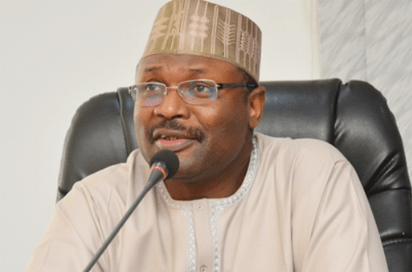 The national leadership of the Independent National Electoral Commission, INEC, has commended the peaceful and successful conduct of the just concluded general elections in Enugu State, describing it as exceptional, one of the best in the country and a demonstration of “good electoral behaviour”.

The electoral umpire added that the exercise in Enugu State, unlike in some states, witnessed no case of “violence, snatching of ballot boxes or all sorts of electoral malpractices”.

The INEC commendation was made by the National Commissioner in charge of Information and Voter Education, Festus Okoye, during the presentation of Certificates of Return to Ugwuanyi the governor-elect, his deputy and the Deputy Governor-elect, Mrs. Cecilia Ezeilo and the elected members of the State Assembly led by the current Speaker of the House, Edward Ubosi.

Okoye, who congratulated the recipients, on behalf of the chairman of INEC, Prof. Mahmood Yakubu, for their victory at the polls, explained that the exercise “is a formal statutory and confirmatory process that you have won an election in accordance with the constitution and electoral dictates”.

He also congratulated “in a very big way, the people of Enugu State for taking ownership of the electoral process and driving it in a very peaceful and conducive atmosphere that fused power and sovereignty back to them”.

“The validity of the certificate rests with the people of Enugu State. It is within their constitutional mandate to renew, withdraw and or elevate it. The key word is service to the people”. Read more>>>>>