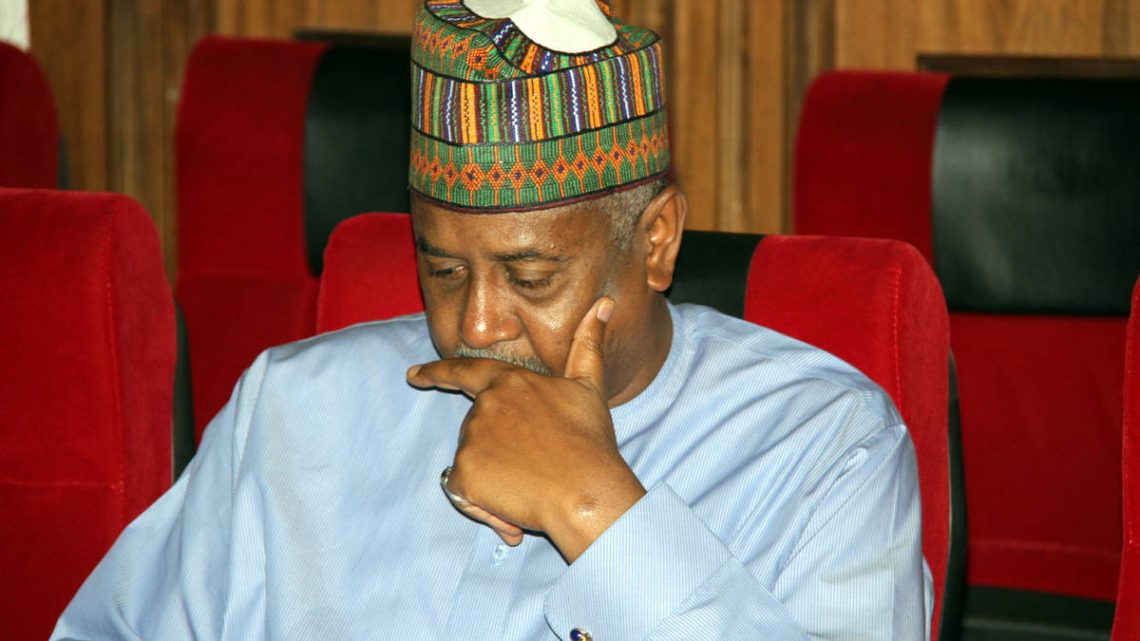 The Economic Community of West African States (ECOWAS) Community Court of Justice has adjourned sine die (indefinitely) judgment in the case of former National Security Adviser (NSA), Col. Sambo Dasuki (rtd) against the Federal Government in which he challenged his unlawful detention by government since December 2015 in the custody of the Department of the State Security Service (DSS). Former National Security Adviser, NSA, to former President Goodluck Jonathan, Col. Sambo Dasuki
The court, presided over by Justice Friday Nwoke had on May 16 reserved judgment till today after taking final argument from Dasuki’s lawyer Mr. Robert Emukperuo and government lawyer Mr. Tijani Gazali.
However, journalists, lawyers and other observers who stormed the regional court in Abuja Wednesday were taken aback when they were told that the much awaited verdict of the court was not ready and that the new date for the judgment would be communicated to lawyers when ready.
At the court entrance, journalists, lawyers and observers were turned back by about twelve security men who told them that the court management had mandated them to tell everybody that judgment was not ready, prompting the people to leave one after the other when the reality dawned on them that the court will not sit after all.
Dasuki had dragged the Federal Government before the ECOWAS Court praying the regional court to intervene in his detention without trial since December last year.
The ex-NSA asked the court to void the detention, the seizure of his properties and to bar government from further detaining him without a lawful court order.
In the court action instituted by his counsel Mr. Robert Emukpoeruo, Dasuki asked the court to award in his favor a sum of N500 million as compensatory damages for his alleged unlawful invasion of his house, detention, seizure of properties and infringement on his rights.
He claimed that government had put him on trial in three different high courts on corruption charges where he was granted bail and that after his bail, he was re-arrested on December 29, 2015 and has since been held incommunicado without lawful court order.
Dasuki told the ECOWAS Community Court of Justice that the federal government has no legal or moral justification for his continued incarceration since December last year.
The ex-NSA who argued through his counsel, while making his final address predicated his stance on Sections 293-296 of the Administration of Criminal Justice Act ACJA 2015 which outlines the procedure for keeping a suspect in detention for not more than two weeks. “To accentuate the illegality of the arrest and detention of the applicant, the ACJA 2015, S.293 to 296 thereof, set out the procedure for the detention of any person pending trial or investigation. And in summary, that procedure requires judicial intervention by a magistrate for it to be carried out and the maximum detention time-frame is two weeks”, he submitted. Emukperuo had earlier filed an application to amend the originating application by including additional reliefs, a request the court granted, ordering the defendant to respond, if any, within 15 days to the issues raised in the amendment.